Little Howard And The Magic Pencil Of Life And Death 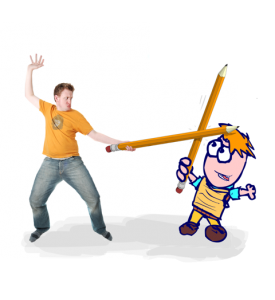 On an adventure which includes hilarious songs, games, the weirdest picture book ever written and some magic glasses, Big Howard and Little Howard fight to save the survival of cartoon-kind. From stars of the Royal Variety and a writer of Danger Mouse and Horrible Histories.

Little Howard has discovered the pencil that drew him. But, on the other end of this magical pencil of life is the eraser of death, and a dark force is at large determined to rub the cheeky chap out for good. And, as if that wasn’t enough, Big Howard has had a real-life baby who is getting a little too much attention! Can Little Howard escape his supernatural nemesis? How will he get rid of this pesky new arrival? Who knows … but there will be danger, drama and a lot of laughs on the way

With interactive stand-up, 3D animation and lots of songs this really is a show that all the family can enjoy.

★★★★★ “It’s silly, it’s clever, original and unlike anything else you’ll see on the Fringe” BRITISH COMEDY GUIDE

★★★★ “It’s Impossible not to be won over by this extraordinarily inventive, spectacularly silly show” MAIL ON SUNDAY

★★★★ “Appeals to both kids and adults but, like The Simpsons, it’s almost wasted on the youngsters” CHORTLE

“I defy you not to be helplessly charmed” THE TELEGRAPH